Ive come to post things atleast 4 times this week and half way through each one I x it all out and leave. Nothing seems right. Either my post is a bit to personal and I dont want to deal with the repercussions of people I really "know" reading it or it seems a bit whiny and full of complaining and with the events happenning in Boston and Texas ... it felt pretty stupid.

So instead I have posted nothing.

And I still have no clue what to write.

5k by the bay recap 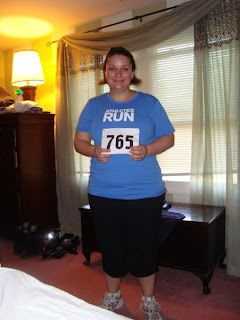 This was me this morning - again running the 5k by the Bay. Next to me is my awesome cousin by marriage that ran her first 5k this morning! She did amazing!!! My time this morning was ______ (to be added once they officially post them, Im being inpatient!.... somewhere in the 28:45-29:20 range) 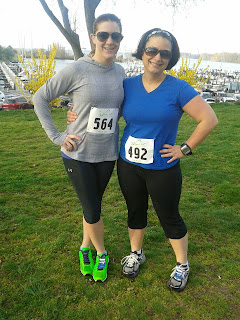 Am I happy with my time? Yes and no. No I didnt hit my goals. I really really wanted a major PR today. But truth be told I haven't focused on speed lately. I have been focusing on upper body strength and my long slower runs. So NO I didn't put the work in for a major PR so Im not super sad it didnt happen. What I am bummed about is that for about 15 seconds I had to walk. Around mile 2 I got a HORRIBLE stitch that was taking my breath away and it won briefly. Prior to that stitch I was on board for the PR I wanted but it reminded me that I didn't put the work into it and the pace was too much for me to maintain. But It was a GORGEOUS day. I got to see a few people that I never see out of work or other situations and I had fun. And my awesomely amazing friend Laura came all the way down to go to breakfast with me afterwards, even after only having 3 hours of sleep the night before. Thats friendship!

While I was impatiently waiting for the race results to be posted I found a site that had quite a bit of my previous racing times on it... made me happy to see :) I was blown away by the difference between my first and second half! And I had a baby between those two!

Whats next? I have a half in two weeks. Not 100% ready for it and have no time goal in place.. just want to enjoy it! After that warrior dash and then tough mudder :)

Tomorrow is the all women's 5K by the Bay in Havre de Grace, MD. I love this run - I'm a bit partial to it because it was my very first race in EVER in 2009. I have come a LONG way since then and I am so proud of what I have accomplished - numerous 5k and 10k's, 4 half marathons and a full!

I have some goals for tomorrow -  I wasnt going to do a tiered goal but if my ultimate goal doesnt happen then I dont want to be totally bummed.

Its so easy to get sucked into the negatives. THAT is NOT where I want to be. Period.

So I figured it was time to focus on the positives - what I am proud of RIGHT NOW.

1. I have rocked the challenges on Tina's best body bootcamp! Todays workout I took to the gym and spent some quality time with the bosu ball.

2. This week Im focusing on two things - no late night munching and getting enough sleep. Very proud of myself on the work on both of these. I have not had a bite to eat after 830ish. I have planned my evening snack and then told myself the kitchen is CLOSED. Ive enjoyed a nice cup of hot tea instead. And I have been in bed before 10 every single night this week. This is huge for me!

3. I've taken more time to sit on the floor and just play. They are only this age once.

4. I rocked my long run this week and that half marathon is feeling more and more a possibility.

5. I have focused on eating at home and making healthy meals with healthy left overs.


Posted by christina at 8:41 PM No comments:

Had a great run today... hell I had a GREAT day today!

Im almost too exhausted to share it but here goes really quick!

This morning started off with a 10 mile run. I parked in the middle of a large gravel trail like run. I ran the 1.4 or so miles to the end of one direction, back to the middle, the 1.8 miles to the other direction, 3 miles through downtown bel air and then the 1.8 miles back to my car. Besides eating my gu at mile 5 and 8 and stopping to cross a few streets in Bel air... I ran the entire thing! Hills and all!!! The very end of the run leading back to my car is a ridiculously long hill. I dread this hill and I thought for sure I had planned it well enough that my 10 miles would be up right before the hill and I could walk the hill as part of my cool down. I get to the base of the hill and I still had 0.25 miles to go to hit my 10 mile marker. I briefly thought about quitting... 9.75 miles is close right. And then as if she was sent there, coming down the hill was a friend from work. I stopped for a quick second, told her I was trying to finish the 10 miles. So she volunteered to run up the hill with me and she cheered me on as we ran it. IT WAS AWESOME and I was soooooo grateful!

My entire run ALL I could think about was a doughnut from Bel air bakery. I burned 1250 calories per my heart rate monitor so I thought I deserved a doughnut. But then as I was coming close to the bakery, I decided an italian ice with family after dinner would be so much more worth wild so I saved my treat.

The afternoon was filled with yard work - hard core yard work. Wish I would have worn my heart rate monitor to see how hard core it was!

And the most awesome thing - and wish I had a picture - we finally took down our xmas lights from the front trees. And no we arent even the last house in the neighbor hood to do so! Dont worry we werent still lighting them! Anyways it took me and a friend plus a very large ladder to put them up. I took them down myself with a small step stool to help me jump up and CLIMB the trees! Shows my upper body work is paying off!

And then I ended the day just as awesome - a trip to Ritas! ANd while I tasted a small taste of everyone elses... I stuck to a sugar free small italian ice. And it was yummy!
Posted by christina at 7:30 PM 1 comment:

In 23 days I run my first half marathon in 2013. I am seriously am not ready. I did NOT put in the time with my long runs and have not done a single double digit run at all. Im getting a bit nervous.

Today I was supposed to do a 4 mile trail run with a new friend but they were calling for early morning rain and I have no desire to run in the mud and take a chance of being injured.

Since that crazy early run wasnt going to happen, I opted for a long run instead.

9 miles in a small town close to me.

Have I mentioned this town is small??? The 5k route goes completely around the town and I didnt feel like doing that route three times. The towns road is in a grid formation - so I ran up and down each street.

The bummer of that kind of run is I was very close to my car a lot - at mile 5 it was very difficult to tell myself to keep running and not head to my car and the local bakery instead.  Oh and let me tell you how bummed I was I forgot my wallet and couldnt get a bear claw after this massive calorie burn of a run!

The good side - through the entire run I kept passing places I have been meaning to go to with hubby for a date night. I have like 4 dates planned in my head right now! Including a dinner on the big paddle boat we had our wedding reception on :) And adorable bed and breakfast!

Now to relax. I get the joy of working 36 hours in the next three days... hate three days of not seeing my babies!
Posted by christina at 8:47 PM 2 comments:

christina
Hi everyone. Im Christina. 37 year old mom to two (ages 11 and 5). Full time nurse practitioner. Married to a police officer. Crazy busy! Lost myself in the mix somehow - time to find me!